Older than the time of chronometers

So much time. I have a lot of friends who are veteran homeschoolers who don't have any more time than they usually do. Their lives haven't altered much beyond cancelling some trips. Their lives are unchanged, and they're mourning that all the free time hasn't occurred. I feel guilty, because I'm drowning in free time, unexpected, glorious free time, but I have no plans for it. When I've daydreamed of free time, it's always preceded by weeks of careful planning. I will get these materials, I will buy these books. I will have time, and I will have time and opportunity to structure and fill it just the way I wanted. Instead, I am pulling together a plan two weeks in, because it looks like it will be at least another two months before the isolation is lifted. It's a bit like being shipwrecked- you have this time, you have these disparate materials, what are you going to do? You have a keg of nails, a lot of sailcloth, a box of ship's biscuit that are half weevils. In the modern equivalent, you have rice and those beans you don't like but bought anyway, all your computer games, the stack of books you bought and intended to read to Improve your Mind, not quite enough bread.

So far, it's been World Championship Napping, Monty Python clips, lots of screen time. Two weeks in, and I think my head is starting to clear. I'm back to researching historical jewelry, I pulled out my Ojibwe dictionary, which I haven't looked at in more than fifteen years, and I'm working on the fun aspects of big project homeschooling. I feel tentatively hopeful.
Posted by lissla lissar at 8:23 AM 3 comments:

We are now on the day of isolation where I have started quoting Rosencrantz and Guildenstern are Dead at my children, who are not impressed by it or my attempts to get them to watch Shakespeare and documentaries with me. But I am not deterred! Keep on going!

Thomas: "Huh. Is that Doctor Strange? Why'S he in those pants?"

Eliot booming in my head

I have a few lines of Eliot on repeat in my brain. Not that it's different from most times- I can almost always manage to drag conversations over to Eliot, Chesterton, maybe Thomas Merton. Today I'm sleepy and tense and we are still in the waiting time, waiting to see when the virus will peak and what will be shut down to prevent its spread. I'm fretting because they haven't announced whether school will be back in this year. And at the back of my head I hear

And under the oppression of the silent fog
The tolling bell
Measures time not our time, rung by the unhurried
Ground swell, a time
Older than the time of chronometers, older
Than time counted by anxious worried women
Lying awake, calculating the future,
Trying to unweave, unwind, unravel
And piece together the past and the future,
Between midnight and dawn, when the past is all
Deception, the future futureless, before the morning watch
When time stops and time is never ending;
And the ground swell, that is and was from the beginning,
Clangs
The bell.

Scene from a desk

I'm sitting quietly at my desk, which needs cleaning always and forever. I think of it wryly last my hermit crab shell. Or maybe caddisfly- the ones who build the elaborate mosaic cocoons? All the pretty things all arrayed about me, ready for using, keeping me from being bored. I can work at home, wearing a silly magnifying visor and shouting at the kids to leave me alone. Work is a blessing and a joy, even when I'm scraping out a 2 by 2in space for my current project among all my other projects. 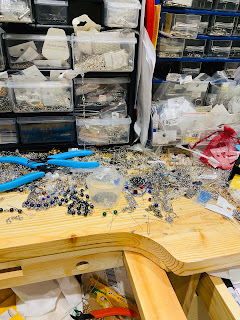 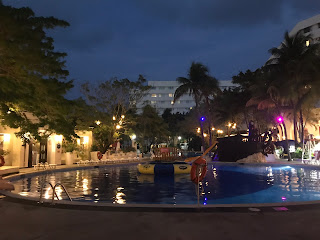 Two months ago we were frantically packing for ten days holiday, first in Cancún, and then in Houston with family friends. It was mercifully cool in Mexico, under 30C most of the time, and the kids lived in the pool and ate ice cream and pulled pork and beans and complained about the corn chips and I was horrified by the resort's idea of American food. The Mexican was unsurprisingly much better. Warm water and palm trees and food. I was careful to tell my kids twenty billion times that when I was a kid, we went camping and got chased around by skunks and it rained a lot. None of this flying to tropical paradise when I was little. We went because my aunt and uncle very kindly took us. Next winter I should tell the kids that we are going on a glorious vacation to, oh, the outer reaches of the suburbs and crouching in a cardboard box with no wifi.

I don't know why my kids don't take me seriously.

After Cancún, we flew to visit Rebecca, who blogs at The Care and Feeding of Geeks, who is one of my closest friends. She has three kids, and I think our combined children reached nearly light speed velocity in playing and having fun, and my kids taught hers how to slide down their stairs in a sleeping bag. Sorry, Rebecca.

Right now I'm sitting on an empty streetcar heading downtown to pick up supplies. Toronto looks to be doing an awesome job at social distancing. No one is getting closer than about eight feet, which is two feet farther than most people usually stay apart, and everyone is watching everyone else uncertainly for social clues. Or maybe that's just me.

I wished for more time at my workbench, and I got it! Just in a very odd and catastrophic way. Aside from puttering around making things, I have been doing a lot of reading about the philosophy of BB craft, as I mentioned. I think it's started last year with someone, maybe at another blog, reading Craeft? Which was good, but lacking, I thought. The author carefully leaves everything out of craft that he doesn't personally feel enthusiastic about, was my curmudgeonly reading. And since I already have thoughts based in Ursula Franklin's The Real World of Technology, where she makes a distinction between wholistic and prescriptive tech, I have already slotted artisan ship messily into the first. For those who don't inhabit the inside of my brain with me, wholistic technology is when one person has control over the whole of the making process. Prescriptive is when everyone specializes and things are broken up.

I was reading The World Outside Your Head last night until it ran smack into a lot of -9th century German philosophy and felt quite tired. Hah. The point just before sleep hit was about how old cartoons portrayed the physical and inanimate as malevolently destructive or at best intransigent. Think of old Disney with the attacking clocks and beds and cars, or Wile E Coyote with his disastrous schemes. Now, the author says, all kids' shows are filled with safe, controllable landscapes and the problems presented are easily solved with the use of clever machines.

I haven't got far enough to know where he's going, yet, but what immediately strikes me in the difference between the two is the power/change differential. In the new cartoons, the problem is easily solved, the characters remain unchanged. And everything is safe. No risks of engagement happened. In the first, the only way to triumph is to adapt, change, and plan. The main character needs to rethink and be willing to deal with all sorts of problems and discomforts. I am forming my thoughts about it, but it brings me back (the way everything does) to Eliot, and the relationship between people and the River.

"The problem once solved, the brown god is almost forgotten
By dwellers in cities..."
Posted by lissla lissar at 10:19 AM 4 comments:

All my friends are apparently dying by children and home time, and my MiL took three of my kids away (to maintain social isolation inside a large pile of sticks, from the pictures. It's nicely feral), so what I have at home is one kid who only wants to build in Gary's Mod? And make things from LEGO? And take apart busted electronics? I feel like this is insufficient suffering and maybe I should go out and find some gravel to chew or something.
Posted by lissla lissar at 2:18 PM 6 comments:

Do they need to eat dinner every day? I just took some things out of the freezer. This week will feature:
Hot dogs
Garlic and parsley spaghetti
Zucchini gratin
Enchiladas
Slow roast pork loin
It's all very exciting.

What I'm reading or rereading